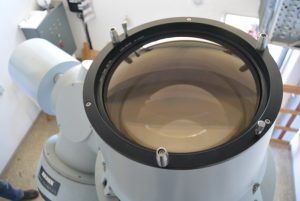 Zeiss had built two systems, one for the TUM in Wettzell, Bavaria and the other for the Observatory Lustbühel near Graz, Austria. Our system is the one from Wettzell. It was originally financed through DFG SFB78.

The BMKs were built in the 1970’s by Carl Zeiss Jena (see Handbuch) with the purpose of imaging laser-illuminated satellites for their orbital determinations. Therefore, the optical system is laid out for high astrometric and photometric precision and is a so called Astro-Topar system with A-characteristics consisting of 10 individual lenses (see Table 1). Its free entrance aperture is 300mm (338mm lens diameter), f/2.5 and has a focal length of 751.1mm (cf. BMK75).

No design file is available nor are any of the glasses and radii known. The focal plane is planar over a linear range of 180mm by 180mm (nominally 13.6°×13.6°) and has a measured back-focal-distance of 43.4±0.1 mm. Due to the glass selection the usable wavelength range is restricted to redder than 450 nm which, therefore, does not permit the application of U or B filters. 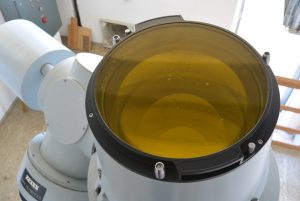 The Graz BMK had been used with Johnson V, R and I filters in the past (Weingrill 2007, Master thesis, Univ. Graz). The only optical error measurable is the chromatic aberration, which means that redder wavelengths have a longer focal length. Zeiss also quotes an average astrometric error of 0.75′′ per measurement from in-house satellite measurements.

The optical length of the optics tube is 984 mm without the CCD dewar, the entire height is 2300 mm. The action radius (moving circle) measured from the system’s center of gravity is 1000 mm. The latter is itself off by 80 mm from the center of the mount’s footprint. The system height floor-to-optics is 2000mm when in home position (telescope on one side of the mount, zenith pointing).
The telescope and the CCD are currently mated in Potsdam, Germany.